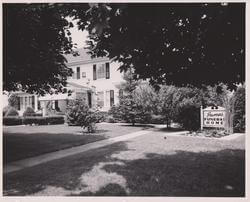 Today the Watson Funeral Home serves about 200 families per year, and is one of the well known and respected funeral homes serving lower Delaware and parts of the surrounding Maryland counties. It all began a long, long time ago,  back in the 1820's when Paynter Frame Watson married Anna Moor and they went into a multi-faceted business located in Centerville, Delaware (Now called Roxana, Delaware). It was Paynter F. Watson Carriage Sales, Harness and Tack , Furniture Making , Casket Making and Undertaking. In those days, there were many duties to be undertaken in holding a wake at a home, and funeral in a church-hence the term "Undertaker" was born. One of the Watson family members living today has a death certificate signed by Paynter F. Watson dated 1830, and this is the date we recognize today as the start of Watson Funeral Home, though unofficially, it could have been as early as 1828. Paynter and Anna had one son, Henry, before she tragically died at a young age.

Paynter and his young son worked together in the business when Henry became of age. Henry went  on to distinguish himself serving in the Union Army during the Civil War, and took a bride, Ceclia, and fathered many children. In the later 1800's, Henry moved the business to Selbyville in order to be near the Railroad Station there. He fathered many children, and his sons " Young Henry", P.F. Watson, Medford, Clayton, Adolfus and Pasher Washington Watson, Sr. all went into the business as undertakers, and the business could not support that many men so they fanned out and started new  locations, located in Selbyville, Frankford, and Seaford, Delaware.

"Young Henry" pioneered new designs of burial vaults; founded Watson Vault Company winning patents on his designs; and eventually moved to Pocomoke, Maryland and started a funeral home in that city as well.

Pasher Washington Watson, Sr., grandson of "Old Henry" married his wife Mary, and continued operation of the Henry Watson & Sons Funeral Home in Selbyville until he was killed in the line of duty while making a removal from Delaware Hospital during Christmas, 1936. He was hit by a drunk driver who careened up on the sidewalk hitting Mr. Watson and the removal cot. Mr. Watson struggled to live for a few days, but ultimately succumbed to his injuries. His son Pashur Washington Watson, Jr. and his wife Alberta had to carry on the business, now entering the third generation.

During the era of Pashur, Jr. and Alberta many changes occurred through the 1940's, 50's and 60's. Significant to the current Watson Funeral Home was the birth of Richard T. Watson, who entered the business and married Carol Givens and the two carried on with operation of the Selbyville location, and soon was to enter into a union with another firm in Sussex County. In 1943, Ronald and Gladys James took the amazingly risky move of purchasing an exquisite home on main street of Millsboro, Delaware to start a funeral home. World War II was on full tilt, there was rationing, and shortage of materials of every kind. Ronald and Gladys endured years of struggle and hardship to make a go of the funeral home, working other jobs to support the meager beginning. By 1949, Ronald was prospering enough to give back to the community. He worked with war veterans returning home to start an ambulance service, and he bought the first ambulance Millsboro ever had, and the VFW men operated it. Because the phones had to be manned 24/7 at the funeral home already, it was easy for the funeral home to dispatch. However, Mr.James had strictly admonished the men that if there was a death involved in any ambulance run they made, they were to in no way favor James Funeral Home if the family was established with another funeral home.

The James family grew to be beloved in Millsboro, and the James Funeral Home grew to be recognized as a premier facility in Sussex County. Needing help, Mr.James called upon Richard T. Watson and Carol to come work with them, even as Richard continued helping his father Pasher, Jr. in Selbyville.

By the mid to late 1960's, the James Funeral Home and Watson Funeral Home began to merge. In 1970, after the retirement of Ronald and Gladys James, the firm fully merged in the Watson Funeral Home family, with both the Selbyville location and the Millsboro location operating simultaneously. The great legacy of Mrs. James, who is still active in her advanced age is her philosophy she wants passed on: " That this is a great country with great opportunity, and anyone who is willing to work hard, and take risks - they can make it!" oil portraits of Mr. and Mrs. James, and a beautiful oil painting of Betts Pond done by their daughter Connie adorn the entry way of the funeral home today.

Upon the subsequent retirement of Pashur W. Watson, Jr. and his death, by the early 1980's the Selbyville location was closed and all operations had been transferred to the splendid facilities at Millsboro.

In 2005, Richard, Sr. and Carol decided it was time to retire after Richard's 39 years of serving in the community. He called upon his son Richard, Jr and wife Tia to move into the sixth generation of Watson Funeral Home. Richard, Jr. had concerns that the size of the business had grown to such dimensions that he needed a partner, and recruited Robert Herrington, Jr., a native of Ocean View, Delaware to join the firm. Rich and Bob continue to have a partnership to this day in the ownership and operation of the funeral business and land holding company managing the property on which the funeral home is located. Extensive modernization of the facilities has been ongoing since Rich and Bob have worked together, and they have invested many thousands of dollars in plant and system improvement, landscaping, vehicle upgrades and contracted services to make Watson Funeral Home what it is today.

Watson Funeral Home is honored to be affiliated with, and a credentialed dealer for Thacker Casket Company and Doric Vaults; Both companies proudly make their products in the USA. Our firm earnestly looks forward to moving progressively into the seventh generation. It is extremely rare for business to survive for three generations, and both Rich and Bob feel a great historical obligation to carry on the business well into the future.